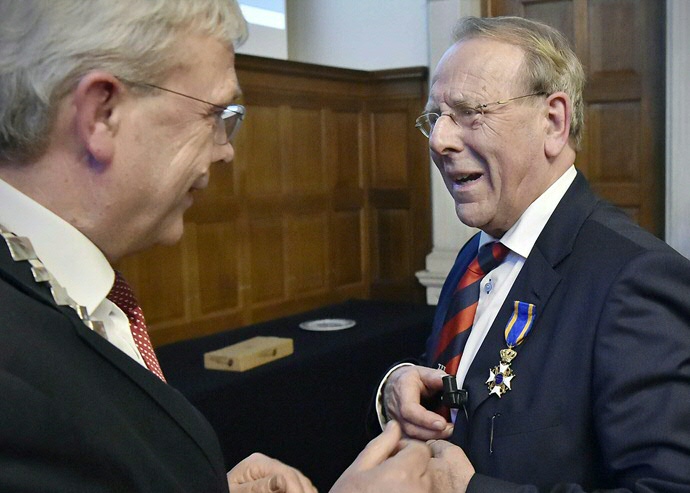 On Friday 29 March, Prof. J.Th.M. De Hosson has been awarded the Royal Decoration of Knight of the Order of the Dutch Lion. He was presented with this decoration by acting Mayor Koos Wiersma of the Westerkwartier municipality directly after his valedictory lecture in the Grand Auditorium of the Academy Building.

Our Honorary Member, Jeff Th.M. De Hosson (Utrecht, 1950) is Professor of Applied Physics at the UG, specializing in Materials Science. For four decades, he has performed excellent, innovative technical-scientific research and teaching as well as management duties. De Hosson was appointed Professor at the extraordinarily young age of 27. Throughout his highly productive career, his scientific achievements in the field of physical materials science have resulted in many societally relevant breakthroughs.

In the course of his career, De Hosson has developed into a renowned worldwide leader in the field of physical materials science. His scientific achievements are universally praised and often discussed in a range of prominent academic journals. The impact of his work and his innovative ideas in the field of high-powered lasers are internationally undisputed. He is one of the world’s three best scientists in his field. He has always focused on research into materials that are also relevant to industry and society, and he has a very keen eye for what industry needs in terms of materials science. For example, he was often a pioneer in the field of 3D printing, which has recently become very popular. His group has been working on the application of high-quality complex materials to substrates using laser technology for thirty years.

De Hosson is internationally regarded as the prime Dutch Ambassador of Materials Science. He is the only Dutch person to have been appointed as a fellow of two very prestigious scientific societies and is an honorary guest professor at several universities in China and South Africa. In 2001, he was appointed a member of the Physics department of the Royal Netherlands Academy of Arts and Sciences (KNAW; Koninklijke Nederlandse Akademie van Wetenschappen) for his extraordinary scientific achievements. He was also appointed a member of the KHMW (Koninklijke Hollandsche Maatschappij der Wetenschappen; Royal Holland Society of Sciences and Humanities) and the Academia Europaea. In addition, he was awarded several highly prestigious prizes. For example, he was the only Dutch person ever to be awarded the European Materials Gold Medal of the Federation of European Materials Societies.

There are many highlights to be found within De Hosson’s work in the field of materials science. For example, his innovative work resulted in a breakthrough in the field of new nanomaterials. The fields of biology and medical sciences have a great need for very precise materials at the nanoscale, for example for injecting medicines in living cells without damaging the cell. De Hosson and his group designed nanoscale metal foams and a brand new, liquid-free instrument that can be used to apply these materials. These fundamental breakthroughs in the field of nanoporous metals also offer potential in other fields, such as hydrogen storage and batteries.

A second highlight in De Hosson’s career concerns electron microscopy. He succeeded in developing a new method that enabled the creation of 3D images using an electron microscope by using the technique of 3D reconstruction and the chemical composition of materials. This method was patented in 2015.

De Hosson’s great productivity as a scientist is reflected by the size of his oeuvre: about 800 publications in international scientific journals, 200 papers as conference contributions and 35 extensive review articles and book chapters. He has (co-)edited 25 books on dislocation dynamics, transmission electron microscopy, surface science and engineering. The applicability of his scientific work is also reflected by the patents that he has acquired in the fields of image processing, coatings, nanosensors and nanoactors.

De Hosson has succeeded in building bridges between science and technology, and in suggesting elegant solutions for complex technical problems in industry. For example, he was involved in the creation of the high-quality, high-tech material that Philips uses in the razors that it has been producing in its facility in Drachten for many years. In addition, he inspired a large number of startups and SMEs to use his research in the development of innovative products. He was involved, for example, in small and medium-sized industries and laboratories such as Schut-Groningen, RSP-Delfzijl and Kawecki-Delfzijl, creating a smooth mix of fundamental material-scientific and engineering knowledge and industrial performance in the field of high-tech products for national and international society.

De Hosson is also known as an excellent lecturer, mentor and supervisor, and his students and PhD students think the world of him. He can be considered a patron of and driving force behind the UG engineering degree programmes. De Hosson has supervised 84 PhD students and over 600 final-year Bachelor’s/Master’s students. He has always been happy to help young researchers in his research group with ideas and analyses, and he has been a strong supporter of external internships for Master’s students. It was thanks to his tireless efforts that an external industrial internship was included as a compulsory component in the Master’s programme in Applied Physics. De Hosson is known for his inexhaustible support for the many students, PhD students and staff members whom he has helped along in their careers and personal lives. In praise of his enthusiasm, commitment and trust, we appointed him as honorary member of our study association in 1998.

For many years, De Hosson has been very active in the administrative aspects of science and University life as well. For example, he was a board member of the Prioriteiten Programma voor Materiaalonderzoek [priorities programme for materials research] of the Netherlands Organisation for Scientific Research (NWO; Nederlandse Organisatie voor Wetenschappelijk Onderzoek) for ten years. He made great contributions to the KNAW as a member of the Technical Sciences selection committee, the Raad voor Natuur- en Sterrenkunde [Physics and Astronomy Council]. As Chair and member of the China Committee, his excellent relationships with Chinese colleagues enabled him to make great contributions to the aims of this committee. In addition, he was Chair of the permanent Applied Physics and Technical Sciences section and of the Giles Host Medal jury. As Chair of the Werkgemeenschap Materialen [materials working community]/FON, he wrote a report that eventually resulted in the establishment of Technological Top Institutes. De Hosson was also involved in various administrative activities within the UG. For example, he was Dean of the Department of Physics for one term and fulfilled several influential and responsible positions within the Faculty. His diplomatic, thoughtful attitude gave him decisive influence in many committees and boards.

After his retirement in 2015, De Hosson has continued working as leader of his research group at the UG. He is still conducting his groundbreaking research, with the same energy and passion as during his early years as a professor.